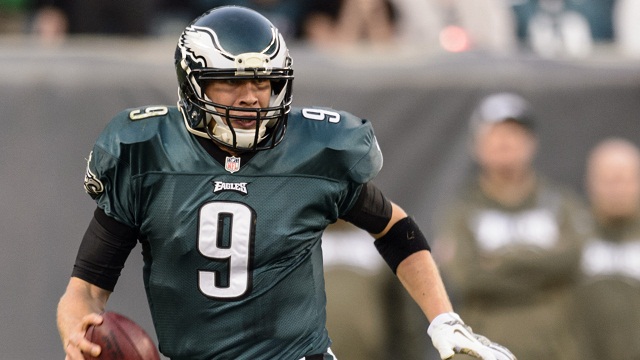 Nick Foles, the 10 game ‘veteran’, finds himself in another QB state of affairs this year. Not that there is a profound controversy about the starter in Philly, because we all know that Michael Vick is the fan favorite apparently all the time, in spite of game play. This is unusual for Philly fans, which tend to be pretty nasty and honest with how they feel, viciously honest at times. The 24 year old Foles can help the Eagles in quite a few different ways than Vick doesn’t do necessarily well.

Nick has proven time and again, that he can move the team up and down the field with accuracy. He picked apart the Arizona Cardinals on Sunday.  But what next for the Eagles, and their 2 QB issues, that they have been seemingly finding themselves in this challenge for the last several years, going back to McNabb and Vick in 2009.

Foles literally had to just sit and wait his time before Vick got hurt. Because if you haven’t noticed, it’s kind what Mike does. Only playing 16 games once in his 11 year career, he has never been the sturdiest of players for any team. Now, once more, it’s Foles’ turn to show that he could be the guy to lead the Eagles in the vacant NFC East, (where every team seems to be substandard)

The interesting part to me is watching both QBs play, the offense hasn’t changed with either one, in the exciting Chip Kelly test as an NFL head coach. And his high octane offensive minded system. Vick of course, has some exciting things about him that not only keep fans wound up, but he can freelance more frequently, and make a play on the run when everything breaks down.

Given his natural athletic ability, Michael Vick has the skills to revive a play that has broken down and is dead in the water. So with that, yes, Vick does have unusual athletic ability when need be. And he has been able to make some great use of those scrawny and beaten down 33 year old legs when needed. But let’s be real here, the days of the Vick’s jaw-dropping plays on any given snap, are long over. He’s not a kid, and his delicate frame isn’t as sturdy and strong as it used to be, and that isn’t saying much with his injury record.

He has always been exciting, but his lack of a solid thrown ball has constantly led me to believe he is more of a circus act than a real playoff winning QB that I would ever want leading my team. He has always been mistake prone, with interceptions, and fumbles as well.

In addition, Vick has a slow release; Nick chucks it out fast, finding his guys earlier, whether it’s hitting the check down to McCoy, flicking it out along the sidelines. He doesn’t hesitate, and throws a really nice ball downfield. He can take control of a game, with accuracy, 61%, and he’s not afraid to chuck it downfield either, and is very good on 3rd downs on top.

Is it possible Foles could become the QB1 in Philly? Why not, stranger things have happened. Last year Alex Smith was playing great ball for the Niners, and lost his starting job to Kaepernick. I’m not comparing Foles to Kaepernick, but you understand the contrast. I have always believed, unless you have a top tiered player at a position, who is without a doubt your man, IE; Peyton Manning, Tom Brady, and Drew Brees. Then an injury is always a threat to alter a career. If a player is playing better than the normal starter, and the team is winning games, isn’t that what it essentially all boils down to?

Foles may be a career backup, or he could potentially be a future starter for a team and end up being really good, or middling, and another Kevin Kolb. (Yea, umm, remember him?) For myself, I like Foles, and I think he can be a legit QB in the NFL. And I think we will all see this sooner than later.