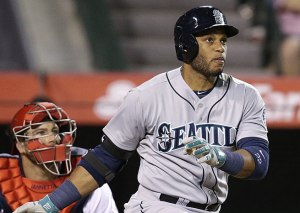 Thursday MLB Free Play is to take the San Diego Padres (-125) over Seattle Mariners (Thursday, 6:40pm EST) The San Diego Padres host the Seattle Mariners and we like the home team to prevail. The Pads have a big edge on the mound in this one, but it’s not baked into the line nearly enough. Jesse Hahn put up great numbers in Double-A earlier this season and has carried that forward to the big league level. Hahn has only made two starts in the majors, but he has looked better than advertised. He has posted a 3.72 ERA and is striking out a robust 11.2 batters per nine innings. Hahn has excelled at every level in his professional career and I like the fact that he’s floating under the radar a bit in San Diego. Erasmo Ramirez gets the ball for the Mariners.

The 24-year old has struggled to make a name for himself so far with a 4.50 career ERA in parts of three seasons. He has had lots of trouble with his command this season and enters today’s game at 1-4 with a 5.27 ERA in nine starts. Neither of these teams brings much punch to the lineup, so I look for this one to be deciding by the respective pitching staffs. Hahn is pitching much better than Ramirez is right now and San Diego has a big edge in the bullpen as well. Add it all up and we get to a play on the Padres at home here. Doc’s Sports is coming off a World Cup Winner on Wednesday and more action is available on Thursday at VegasTopDogs.com!