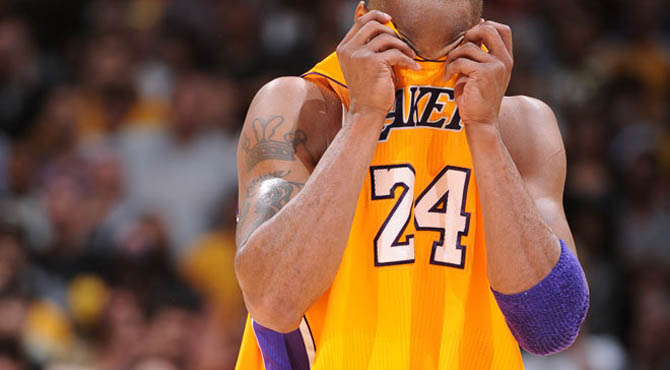 Retire his number, give him gifts and praise him to the heavens, but get Kobe Bryant off the Lakers now.

Bryant is Willie Mays staggering under a fly ball while ending his career with the Mets. Did you see Bryant’s shooting line against the 76ers last night? It was 7-for-26 from the field, including 4-of-17 from 3-point range. He is shooting 18% on the year from behind the arc and hurting the team each night.

The Lakers are 2-15 now. They could be the worst team after losing to the worst team. This is what Byron Scott said of Bryan’t shooting last night: “Yeah, there’s going to be some games like that that you’re just going to live and die with it.”

Scott’s better at jumping on a hand grenade than he is as an NBA head coach. Bryant has shot like that all season, continually hogging the ball and spotlight keeping a young Lakers squad from growing and getting needed shot experience. There is some talent on the Lakers – you just can’t get past Bryant to find it.

Bryant is dead last – 120th – in field goal percentage making just 30.1 percent from the floor. Bryant makes Emmanuel Mudiay look like Wilt Chamberlain in field goal accuracy. It’s getting worse, too. Bryant is 25-for-102 (24.5 percent) shooting from the floor in his last five games.

Bryant already has announced this is his final season. Now, for the good of all involved, the retirement process needs to be sped up immediately.

Written by Stephen Nover from VegasTopDogs.com