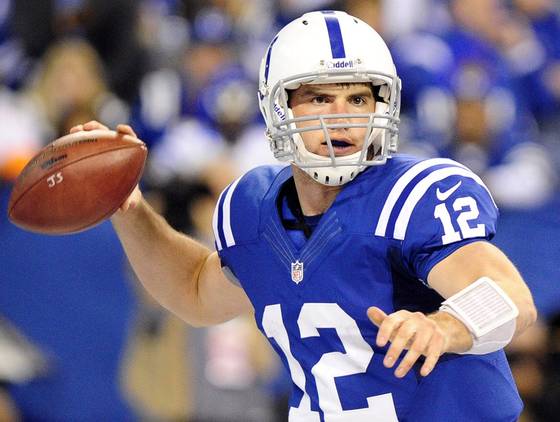 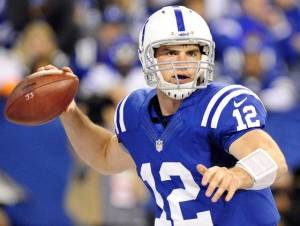 This season, Andrew Luck has had various people judge him a bit with more skepticism than typical. Unsure if it’s because of skills, expectations, or maybe because he almost lost at home to Terrell Pryor, and lost at home to 2012 8th overall pick, and an unsteady QB RyanTannehill.

He has been throwing the ball with spotty accuracy, hitting 59 % on the season, 236 his yards/game are at an unusually low end. Which after his rookie season of 273/ game, one would be led to believe this number would have been much better this season.

At home, in Lucas Oil Stadium, where the team is supposed to be dominant, being led by their general, Luck has been exceptional, winning 75% of his games, going back to last season. This year, so far has been satisfactory in the dome. Throwing for 261/game in home turf. On the road it has been another story, where his number drops significantly, with poor accuracy and only 214 passing yards/ game.

The season has been slippery, for him, losing Reggie Wayne after only 7 games, when he was still his absolute number 1 WR, getting 8 targets/ game, and hauling in 72 YPG. He was likely on his way to a 80+ catch, 1100+ yard year, for the 35 year old wide out. Lucks targets now include T.Y. Hilton as his WR1, his WR2 is Darrius Heyward-Bey, with a puny 10 YPC. Then we have the running situation, with recently benched, Trent Richardson, and his massive 2.8 YPC, which I would believe most would say has not worked out as a great deal for Indianapolis. I would conceive Cleveland feels pretty OK with that deal. So he still has some limited options to move the ball down field.

Luck has the innate leadership that one expects from their QB, with 10 game winning drives in 27 career games, so the kid has the clutch gene. And he does win big games, as he has done this year vs San Fran, Seattle, and Denver, throwing for only 205/ game in those games, but he also threw 5 TDs and 0 ints in those games as well.

Andrew Luck has been fine this season, leading his team to great wins over some top competition. We all hype up the next generation of players, no matter what the sport, sometimes a bit too much. In this case, I don’t believe he has been over hyped, at all. He came in with astronomically huge expectations on his shoulders, and has lived up to them in my opinion. Yes, are there things he still needs to improve on, like his accuracy and road play, of course, but lets also remember the seemingly outrageous time frame of the “old school” 3-4 years it generally takes a QB to adjust to the NFL game.

In a day and age where if a rookie QB isn’t dominating in the first 5 games, it seems they get knocked on and torn apart by the media like sheep in a wolves den. Andrew has a total of 27 games below his belt, and a 67% winning pct. I would have to say, he’s doing quite alright. Its good to be a Colts fan.