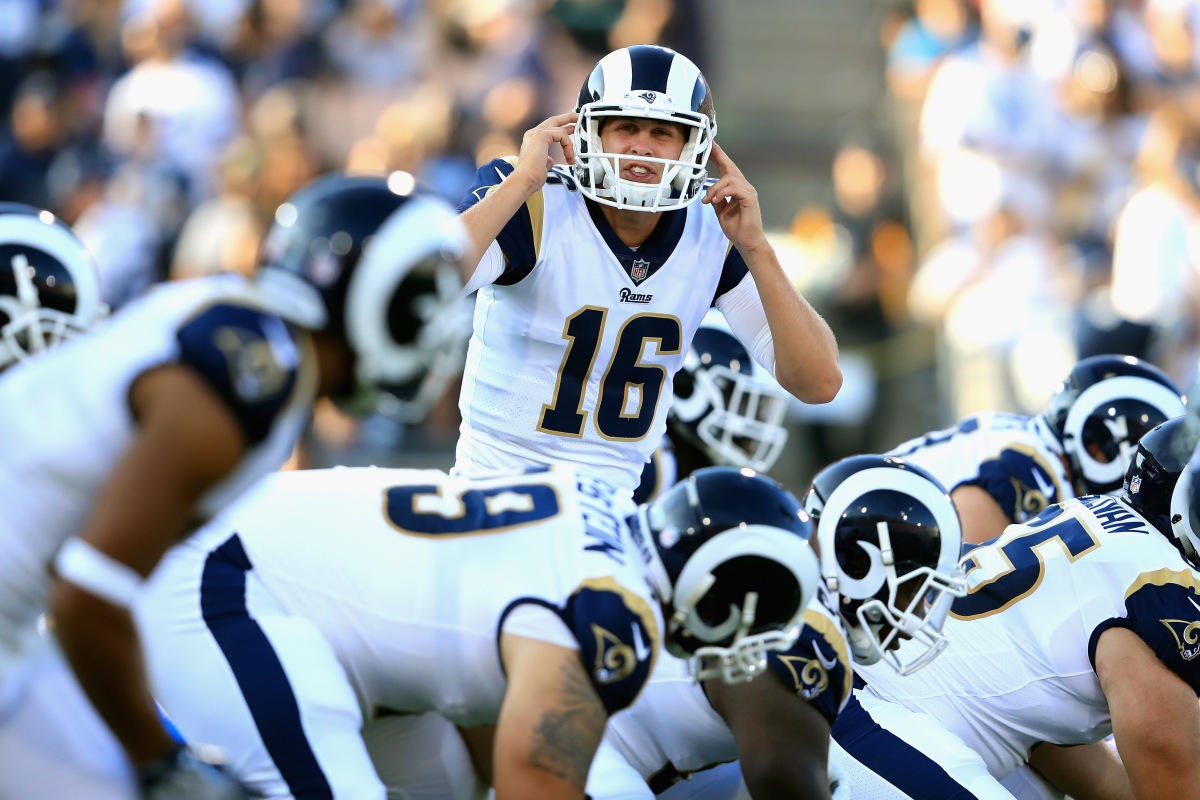 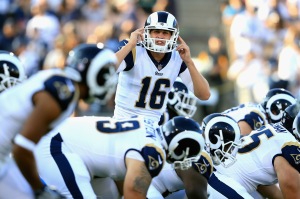 Les Snead was a crafty NFL general manager, when he made the calculated moves that he made – when he traded 6 draft picks in 2016 to obtain the No. 1 selection. Snead used the top spot to grab the California Jr. – Jared Goff who had finished up a fantastic season with 4714YDs, 43 TDs and a 65% completion ratio.
At 6-4 and 230 – Goff certainly passed the eye test to anyone who watches QBs. With smooth play, a good arm, and the exceptional ability to be able to throw his guys open – Jared Goff was everything that a team would want to see on paper – the Rams fans were stunned when he was grabbed over Carson Wentz – who the media was going gaga over. Goff was sitting as the prototype spread offense QB. Wentz played at a far from “big time” school at North Dakota St. – and was playing at what was considered, by some, to be in an inferior system there.
When his career started up – Goff struggled through the Rams training camp and even into their pre-season. Many were looking at him as a project – and he was going to take quite a bit of time to develop to become NFL ready. When Jared finally took the field for the Rams – he put up some awful numbers. With a 54% passing completion, a pitiful 5.3 YPA, and only moving the ball for a miniscule 156 YPG he wasn’t blowing away anyone on the field. In his 1st campaign, he had a truly disastrous rookie season.
Sometimes it becomes a very real issue with a case of over-hyping some players while others under-hype others. Jared Goff was looked at, as being the next big thing, and Wentz was not looked at with the same condemning eyes, yet after 22 regular season games, Goff has finally seemed to have come around. As Wentz was far ahead of Goff in the key QB categories until 2017,wher Goff played himself as a real pro QB. We often see the rookie explosion player that fans love – but then ends up being nothing more than a flash in the pan for the drafting team during their bummer 3-4 year career. It looks like it may have worked out thus far for LA.
When he was playing at Cal – Goff was constantly under incredible pressure, yet he maintained his poise in the pocket, which is one of the intangibles that QBs undoubtedly need for the position at the NFL level. Jared has also been lucky to have talented teammates who have the ability to make big plays after the catch. He has found himself in the great position to be able to stand and deliver, getting them the ball and letting them make a play. Their head coach has designed the game schemes around his 23 year old QB – and his strengths, which is what any player wants from their coaching staff. He has also molded the Rams powerful offense around what Goff does best. McVay’s excellent play-calling and the talented WRs have made great plays after the catch. With 3 players with 12 or more 20+ yard receiving plays – the Rams have the added benefit of having skilled players on the field, who can move down the field in a blink.
The Rams record surprised everyone going to 11-5 and they lit up the NFL for 29.9ppg, which was 1st in the NFL. When playing vs the division, they were tops with a strong record of 4-2, and helped get them to the playoffs for the first time since 2004. Jared has learned how to stand in the pocket and get his passes controlled far better. Making a slight shift in the pocket is the key for him to be the man for this team for the future. With a good 62% passing pct – he has been great with finding his guys when they are running the field. Putting up a solid 1.87 TD/game to just .47 picks – he has shown his QB ability to burn a defense by reading what they have vs him, and picking it apart.
And with 254 YDs/game – compared to the poor numbers that he had put up in 2016 – Goff has been much better with his pushing the ball ability. He has also been awesome on 3rd down – better than both Ben Roethlisberger and Tom Brady – with 11 TD passes, only 2 picks, and a 65% completion rate. Goff’s strengths have always been excellent play-action and his gentle touch with deep passes. He is a very good rhythm passer and doesn’t get easily deterred when things are collapsing. He didn’t need a complete overhaul, but he required a handful of adjustments just the same. The Rams have a revamped offense, which mixes play action and mimics the big named teams with their downfield looks.
Goff is led his Rams team to 11 wins, and his 254 passing yards per game and his 28 touchdowns ranked him 5th in the NFL. Those kind of numbers, lighting it up with his strong arm and field vision, prompted the Rams to easily hand the reigns to Goff this season. The Rams have a strong running game with Todd Gurley and his vicious running attack – along with a stout and terrifying defense. Which helps minimize what Jared has to be overly concerned about. Goff has incredible promise as far as the Rams organization goes. With a lightening quick release and always able to get the ball out of his hand really quickly – the Rams are here to stay.