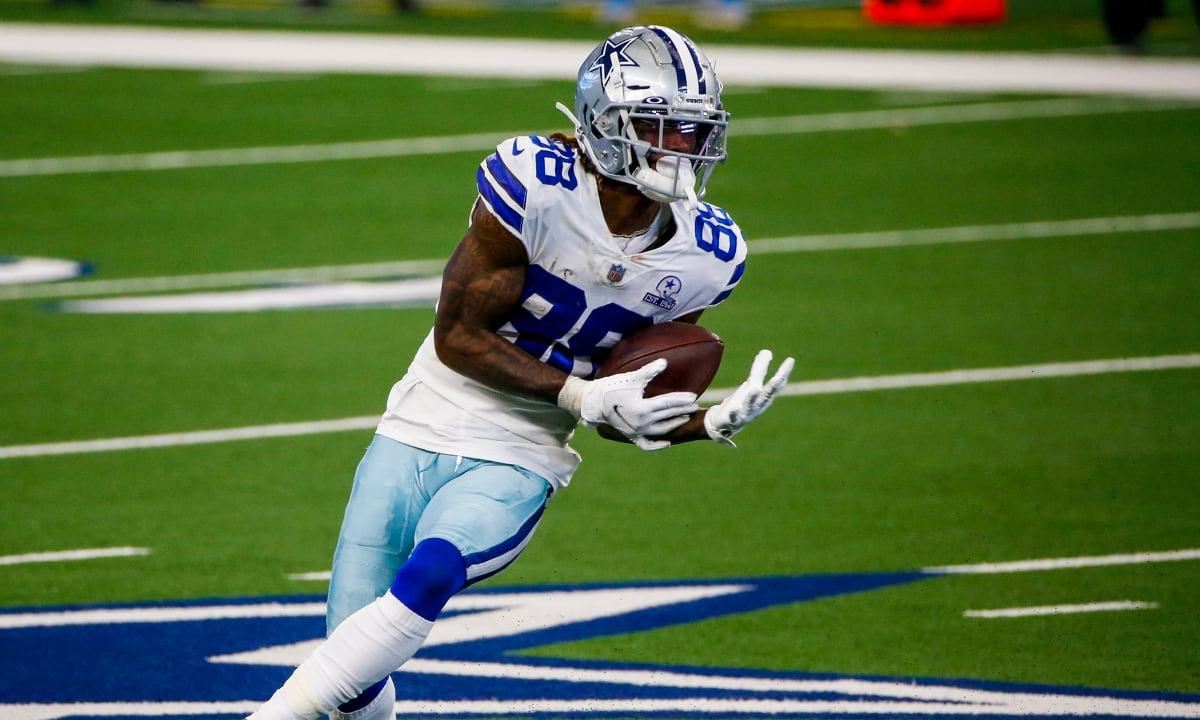 With Amari Cooper’s role looking as if it is taking a backseat, CeeDee Lamb is looking to be the clear WR1 on a team that likes to throw the ball, with a slinging QB who has no problem hanging big numbers on the stat sheet. Cooper is getting a little less action because of CeeDee Lamb – and that means a lot. Lamb is going to get 135+ targets from Dak Prescott, and the former Oklahoma WR appears to become the primary endzone target. It is difficult to say a player isn’t a WR1 in that situation.

I’m not saying Lamb is going to be the reason this team becomes a SuperBowl champion – but the Cowboys had to be pretty confident in what he brings to the team. He is a very talented player, Lamb was really good last year and should get even better this year, and going forward. But he is certainly one of the main reasons they are sitting at 8-4, currently in the top slot in the NFC East.

CeeDee was a very good player last year for Dallas and he had some promising WR numbers. It came from steady play in his games, as he was consistent all last season. There’s no question he is the real deal.  Lamb saw a 17% target share on the team, meaning Dallas was putting the ball in his direction, and that was with Amari Cooper still getting 20% of Dallas’ targets, without Cooper eating as many looks – his numbers are going to increase. He has had 7 or more targets in 7 of 11 games along with averaging 8.1 targets /game on the season. He is getting the looks, bottom line. The Cowboys have been a top ended passing team – for several of the last seasons. For anyone to be a number one WR, they need targets, and Dak throws the ball. Having a confident QB who can deliver the rock is essential – and he constantly throws for over 280 /game, and it is increasingly looking as the identity of the once dominant running game of Dallas.

Prescott doesn’t force throws to anyone, but Lamb has been getting the lion’s share – and looks to continue being the focal point for Dallas to zone in on. He’s the type of player you can feed targets to, as a physical CB1 cannot shut him down – but, having that option certainly is nice, even though not necessary. With Amari moving more into the WR2 slot, his targets will at least the same as what he did last year, if not they will only go up. He has developed as a receiver, has a very accurate QB, on a team that believes in their offensive unit. Making them a lethal duo to deal with for opponents.

The 21 yr old WR was good last season and absolutely deserves to start being looked at among the league’s WR1’s. Lamb ran over teams for 58 YDs /game, and had some solid pieces of the target share, which is only getting bigger, absorbing 111 targets, 74 receptions, along with 935 receiving yards while snagging 5 TDs. Those numbers put him as a strong 2nd option at the position. But this year, I think it is safe to say we can all assume that his top end production has improved and is getting more and more consistent. His downfield yards, and TDs that is showing this year, are certainly enough for a WR1 for the Cowboys. 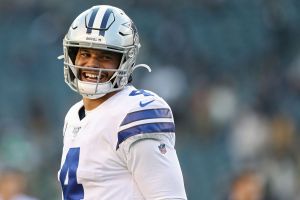 With the NFL draft done, all 32 teams now have their draft picks set heading into the summer and fall. Over the next few days, we’ll be taking a look at each team, division by division, in order to see who came out of the draft with players that fit both need and value.

Today, we’re starting things off with the NFC East.

The Cowboys were expected to target defense or offensive line with their first pick, but they couldn’t refuse when Oklahoma WR CeeDee Lamb fell to them at 17th overall. Dallas quickly snatched up Lamb, with a plan for him to join Amari Cooper and Michael Gallup as one of the team’s starting receivers.

Day two of the draft saw the Cowboys address their defense. With their second and third round picks respectively, they took Alabama CB Trevon Diggs and Oklahoma DT Neville Gallimore. Diggs is a candidate to start at corner to replace the departed-Byron Jones, while Lamb’s teammate Gallimore will provide depth on the interior of the defensive line.

On the final day, Dallas was able to marry need and value with their selections. They added another cornerback in Tulsa’s Reggie Robinson, and found a new potential starting center in Tyler Biadasz from Wisconsin. In one of the best value picks of the draft, the Cowboys ended up with Utah DE Bradlee Anae, a potential third-round pick, near the end of round five at No. 179 overall. They closed their draft out with a quarterback in the seventh round, going with Ben DiNucci from James Madison.

Overall, draft experts praised Dallas’ draft, with some even calling it one of the two or three best in the league. It’s hard to disagree, as the Cowboys came out of the draft with several players ready to make an impact right away.

At fourth overall, the Giants had their pick of offensive linemen in order to boost a group that has struggled for several years. They ultimately decided to take Georgia OT Andrew Thomas with their first round pick, a surprise to some. But just as many experts also felt New York got it right with the pick, as Thomas will be a day one starter at either left or right tackle.

New York has a perfect combination of need and value met in the second round when they selected Alabama S Xavier McKinney. McKinney was expected to be a first round pick, and should be able to start at either safety spot next to Jabrill Peppers. The Giants then used their round three pick at 99 overall to select the big OT Matt Peart from UConn.

As a whole, the Giants made sure that offensive line and athletes on defense, their two biggest needs heading in, were met. Although they didn’t draft a center, true pass-rusher, or even a wide receiver, it was considered a successful draft for New York.

With a clear need at wideout heading into the draft, the Eagles did in fact go wide receiver in round one. Although it wasn’t the receiver many people thought it would be, as the team passed on LSU’s Justin Jefferson in favor of TCU WR Jalen Reagor. Even though it was a little bit of a surprise pick, Reagor should provide explosiveness to their offense.

Philadelphia continued the surprises on day two, taking Oklahoma QB Jalen Hurts in the second round. The Heisman Trophy finalist becomes the backup to Carson Wentz and a viable option in case Wentz gets hurt. It also wouldn’t be a surprise if Hurts was used on certain packages and option plays for the time being. They finished the day with Davion Taylor, the speedy linebacker from Colorado.

The draft experts loved Philadelphia’s day three picks, with GM Howie Roseman finding some great value late. Clemson S K’Von Wallace was picked in the fourth round after some believed he could go as high as the second round. They also picked, among others, Auburn OG Jack Driscoll and Boise State WR John Hightower, both of whom were good value picks. In addition to four more day three picks, the Eagles also traded for 49ers WR Marquise Goodwin.

Even though some of their earlier picks were considered a little puzzling, the Eagles definitely targeted wide receiver and filled that need. They also improved their depth along the offensive line and at pass-rusher. It’s a solid draft that could be considered brilliant if Hurts ends up becoming a huge piece for them.

After the Bengals got the draft started with QB Joe Burrow, the Redskins had the next no-brainer pick and took Ohio State EDGE Chase Young. Young was the draft’s best defensive prospect, and should be a staple on Washington’s defensive line for years to come.

With no second round pick, Washington’s only day two selection was a running back near the beginning of the third round, Memphis’ Antonio Gibson. Gibson is a do-it-all running back who new head coach Ron Rivera can deploy in a multitude of ways.

Day three was a busy day for the Redskins. The action started with a trade of disgruntled OT Trent Williams to the 49ers in exchange for a fifth round pick this year and a third rounder for next year. With Williams gone, Washington selected his potential replacement in the fourth round, LSU OT Saahdiq Charles. Liberty WR Antonio Gandy-Golden was a good value pick in the fifth round, as was San Diego State C Keith Ismael, who was taken with the pick acquired from San Francisco. The team had three more picks to wrap up the day, including N.C. State EDGE James Smith-Williams, to close out their draft.

Desperate for impact players, the Redskins certainly got that in Young, with Gibson and Charles also expected to see the field often. They are hoping that their good draft, paired with the new coach and the development of QB Dwayne Haskins, can propel them out of the division cellar.

When you are ready to bet on the teams from the NFC East – head to PayPerHead247; our favorite pay per head bookie site.