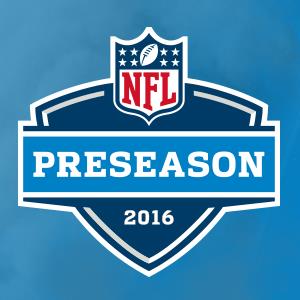 Betting the NFL Preseason in 2016

You will hear people say “Don’t bet on NFL Preseason Football”. Big Mistake! It’s actually easier than capping the regular season. In most cases you can read ahead of time the exact game plan for each team. I feel the NFL preseason is a great opportunity to start and build a nice bankroll for the upcoming regular season.

Many handicappers have the opinion that the preseason games should be left alone and not bet on. I feel just the opposite. If you do your homework, the preseason offers the betting public a tremendous chance to make a lot of money. Here are some things to consider when betting NFL Preseason football in 2016.

This one is obvious. Jo public gets so worked up about the starters and skill position players on certain teams during the regular season. But they’re the same in the preseason. Teams that can go two-and three-deep (sometimes four-deep) at the skill positions have a decided advantage over a club that has a few stars that will be sitting after the first or second series. A perfect example of a team like that this season, is no other than the San Diego Chargers. They have four solid quarterbacks that should help to win games in August. Or, keep games close. Philip Rivers, Kellen Clemens, Zack Mettenberger all have NFL game experience. They signed QB Mike Bercovici out of Arizona State. He’s not big but has a strong arm while putting up some lofty numbers in College. All four QB’s will have lots of success going up against second, third, and sometimes fourth-string defenses. The Chargers have a distinct advantage over a club like the Cincinnati Bengals, who have a solid #1 in Andy Daulton, an up-and-down #2 in A.J. McCaron, but unproven #3 & #4 in Keith Wenning and Joe Licata respectively.

The Bengals will also be learning a new offense under first-year coordinator Ken Zampese. He’s been with the organization as QB coach since 2003 so that helps, but he’ll be calling plays for the first time this August. There will be an adjustment period early on. The Chargers welcome back Ken Whisenhunt as offensive coordinator where the team put up big numbers back in 2013. The Chargers were ranked 5th in total offense compared to 31st the year before. San Diego loves the offense under Whisenhunt and all the pieces are in place. The Chargers should have a very successful preseason and could be a sleeper team in the AFC West. Look for RB Melvin Gordon to have a much better sophomore season than his 2015 rookie campaign.

Quarterbacks and continuity are key. NFL Preseason wagers, just like those during the Regular Season, often come down to the last eight minutes of a game. So find teams that have solid depth at QB and/or has some experience or success in the league. They’ll have a tremendous advantage in the closing moments of a game against a third and/or fourth-string defense.

I don’t necessarily mean which team has the most grizzled veterans on it. In fact, experience can be a detriment. Most Vets hate preseason games. And teams that have established players in certain positions or roles will often see those guys mail it in during the preseason because they know the games are “meaningless” and already have their “jobs” locked up.

However, experience is a key factor when it comes to coaching systems. Organizations that haven’t experienced much turnaround have a significant advantage over those that are easing in a new brain trust. For example, New England has been running Bill Bellichek’s/Josh McDaniels system since 2012, as too have the Pittsburgh Steelers with Todd Haley. The Patriots and Steelers are going to be much sharper than a team that is changing offenses. Take the Kansas City Chiefs for example. They are breaking in two rookie offensive coordinators in Brad Childress and Matt Nagy. Two voices are not better than one when trying to learn a new offense. Andy Reid is still going to call the plays. There is going to be a major adjustment period for the Chiefs on offense this August. Keying on clubs that have familiarity & continuity, and finding clubs that are much less comfortable with their new systems is a big key when wagering on preseason games.

We have seven for the 2016-17 season once again after seven made their debuts two seasons ago. First year head coaches can be tricky but generally perform very well in their first August home game.They went 6-1 ATS in their first home game last preseason! A lot of expectations are put on these guys coming in. They want to show the Owner, General Manager, and fans that he is the right man for the job. Setting the tone early means playing to win in the preseason. Here are the Lucky 7 this year.

If you know how head coaches were raised and what their philosophies are than you will have a big advantage this August. I know all the personalities/traits of every single HC in the NFL which helps me beat the books in August. I will give you one HC that preaches competition from his players down to the ball boy. That would be Pete Carroll of the Seattle Seahawks. His philosophy at USC was to create competition along with a winning attitude. That has continued since moving to the NFL. Pete Carroll is 27-13 ATS in his career when playing in August. Coming off his Super Bowl loss against New England, the Seahawks went 2-2 ATS last preseason. I would expect a much better effort this year. On the flip side is Jason Garrett of the Dallas Cowboys. He uses the preseason basically to scout his younger guys and it shows. His 6-14 ATS record in the NFL preseason is the worst active record in August with at least 20 games played.

If you watched the NFL for any number of years you should know that not every Head Coach cares about winning in the NFL Preseason. Different HC’s have different agendas when playing August Football and they all pretty much stick to their beliefs. I gave you two very good examples above that should hold true once again this upcoming season.

Each coach handles the preseason differently. Some put a premium on the second game. For some it’s the third or even the fourth. Some coaches just mess around and tinker with their lineups during the preseason and use it to evaluate their younger guys. But here’s the key – and this is a big difference between the regular season and preseason football – most coaches are forthright about what the game plan will be. All you have to do is a little research from the local beat writers.

The preseason schedule generally isn’t too taxing on the teams and players. But there are quirks. The two teams that play the Hall of Fame Game are a good bet to fade in their next game. If some key players are a bit banged up then you can expect those guys to be watching in street clothes. Keep a close watch on how the players from the Steelers and Colts come out of the Hall of Fame game. Also, NFL teams who play on the West Coast (with little to no humidity), and than travel to play a high humidity East Coast game. It would be wise to fade those West Coast teams especially if installed as a favorite.

Now, it’s hard to just blindly play against Super Bowl teams from the previous season (Carolina/Denver) as a favorite of 7 or more points in every preseason game. You have to pick your spots. Over the past five seasons alone, these teams are just 3-9-2 ATS, so you would have made a huge profit. The oddsmakers have caught on in recent years and you will notice very few preseason games with any point spread of 7 or more especially early on.

If you are looking for a very solid system/angle in the NFL preseason, here is one to consider this year. Teams that begin 0-2 straight up over the last ten years are 54-36 ATS in their very next game. Head Coaches/owners tend to get very nervous when they get off to a bad start, even in the preseason, and they have their team ready for that third game. Most teams will take that 0-2 team lightly, thus making those winless teams a smart play by the “Wise Guys”. If two 0-2 teams are facing each other, its a no play and that’s reflected in the record above.

Look for more Football articles in the coming weeks. Jeff was ranked No.2 in the 2014-15 NFL regular season at The Sports Monitor of OK, cashing just under 70%. Jeff has shown a profit in six of the past seven years in football, fully documented. Early Bird Football packages are now on sale.

by Jeff Hochman for VegasTopDogs.com