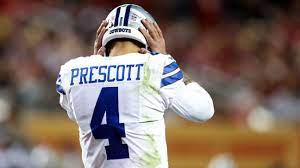 The Dallas Cowboys have been more than formidable this season having beaten teams by 10 or more points on 7 different occasions. They are currently sitting 4th in the NFL in scoring at 27.5 per game, and their defense has been brutalizing giving up just 20.1 / game. And they have wreaked havoc on opposing quarterbacks with 54 sacks and 110 quarterback hits and that’s not including the 16 interceptions.

Last year in 2021 they had the Wild Card loss versus the San Francisco 49ers, 23-17 and they lost again to SF this season as Dak had 2 costly turnovers. That is certainly an experience that Dallas and their fans would like to get past – and get that ugly taste out of their mouth. Is this the year they can do it, and if so, who or what will be the reason they can?

Dak has had a disappointing season this year with 23 touchdowns and 15 interceptions. Last year, he was outstanding with 37 TDs and just 10 interceptions, in many ways, this year he has greatly regressed. Dallas tends to win better the better the Dak plays that’s the bottom line. And 2 out of the team’s 3 losses, this year – Prescott threw 2 or more interceptions. If he’s having an off day and not completing his passes, if he completes 60% or less the Cowboys are also 0-2. And like most quarterbacks in the NFL, obviously the less pressure he faces and the less times that he’s hit and sacked behind the line of scrimmage, the Cowboys do better. In games where Dak was sacked 2 or more times in the game, the Cowboys are just 2-3. So if he stays up right the Cowboys win that’s a huge key for any defense facing him and this powerful Cowboys offense.

Dallas Cowboys fans have been waiting 27 years for this team to make the Super Bowl again. The last time they were in the Super Bowl – was all the way back in 1995 – when they played the Pittsburgh Steelers and won, 27-17. Dallas had some really good teams back in 2007 and 2009, but we’re never able to make it any further than the Divisional round. And currently, Ezekiel Elliott is not a kid anymore at an aged and road weary, 27 yrs old – Dak kind of seems to have peaked, and we know who and what he is going to be.  But now it seems as if this team’s identity really has been their monstrous defense. Micah Parsons the 2nd yr pro has been on an absolute rampage this year with 13.5 sacks, 14 tackles for loss, and 3 forced fumbles. His ability to almost personally stop opponents and make key plays when needed, has been phenomenal. So for a quarterback to have that kind of support from the other side of the field is hugely advantageous. And it definitely seems like he can expect that kind of support in any game any week, as their defense has allowed 19 or less points in 56 % of their games this year so far.

As a team that blew out Minnesota, 40-3, back on 11.20.2022, then also was able to handle Philadelphia, 40-34 on 11.24.2022 – they certainly appear to have a high-powered defense and an offense that’s capable of putting up points. Any team that has those 2 qualifications, certainly does, and always will have, a very strong chance to make the big game. They are definitely going to be a team to keep your eyes on next year with good odds to make the Super Bowl as their defense is tough and they have a lot of playmakers.

One thought on “Is Dak the right QB for Dallas”