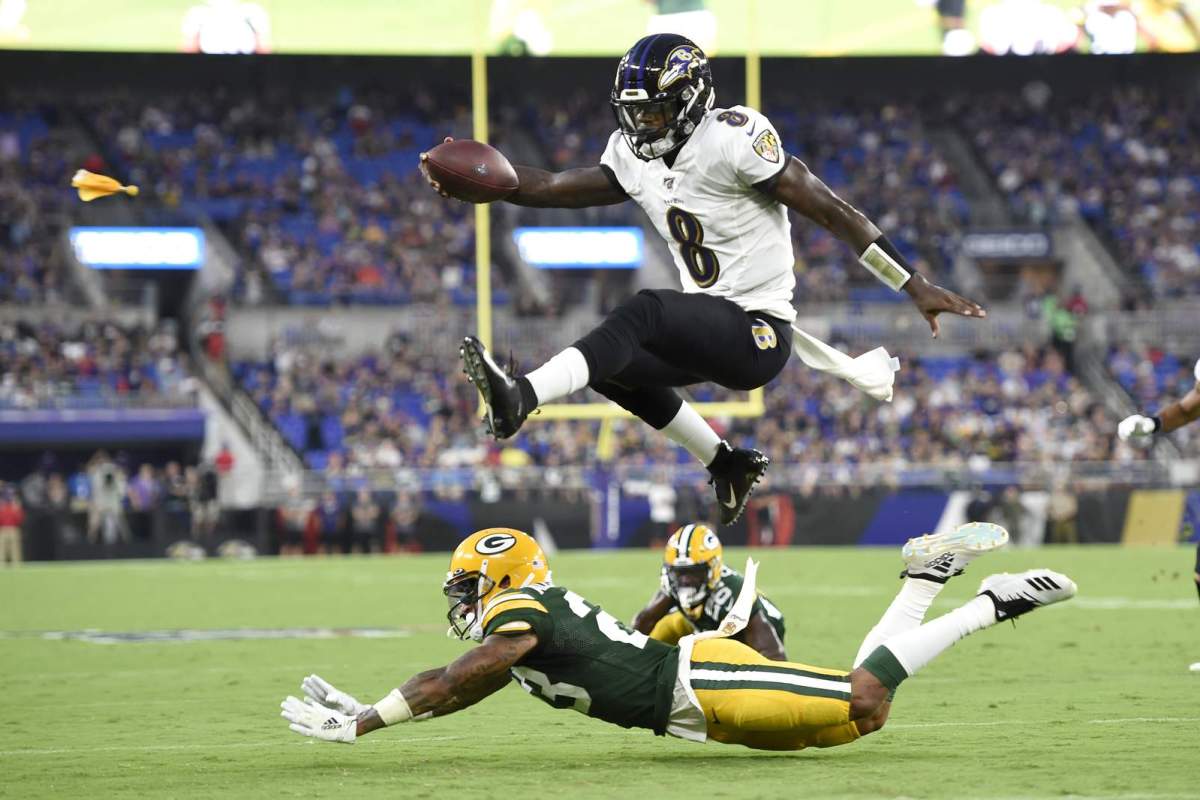 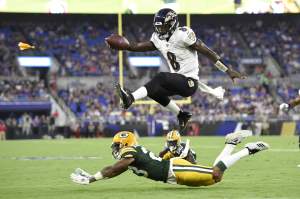 Russell Wilson was awesome this season with 4110 passing YDs, 31 TDs, and just 5 picks – Christian McCaffrey had a monstrous season with 2392 total yards from scrimmage and 15 TDs, and Derrick Henry can’t go unrecognized with his 1540 rushing YDs and leading the NFL with 16 rushing TDs for the NFL this season.
But then there’s Lamar Jackson – what Lamar did was beyond any semblance of normal – 36 passing TDs and 7 rushing TDs are pretty hard to overlook. With 6 games of 300+ of total offensive yards including 4 games of 100+ rushing yards or better, he dominated the AFC. Teams knew he was coming and he still racked up 4333 YDs of offense for Baltimore this season.
Lamar made the Baltimore Ravens Oline look better than they are – the Ravens have the same front that couldn’t block for Joe Flacco. As Baltimore’s Oline was banged up quite a bit – guys that were hurt for numerous games – so they barely had the same front all season long. If Jackson couldn’t get outside the pocket, when things went sideways – there would have been a lot more sacks. The 23 year old QB also did more with less with his receiving corps – as he only had Mark Andrews and Marquise Brown as his primary guys to throw to, and neither are really looked at as elite players, that are ripping up teams on the field. Lamar had very few weapons around him, but was lucky to be on a team that has a defense one that gave up just 17.6 ppg – which I think is based solely on the fact of their offense being so potent. The defense was able to tee off – because they found themselves ahead and putting up so many points – it forced teams to start throwing. Their receivers wouldn’t be starters for most offenses in the NFL. Andrews is a solid weapon – but otherwise they don’t have a ton of guys to throw the ball to, without Lamar – the Baltimore Ravens probably win 6-8 games. Tops.
Jackson put together an amazing season while leading his team to 14 wins – including wins over he Niners and the Pats and they hung 33 pts per game because of him. The MVP is the player who was most valuable to his team, the guy who, if without him, the team would’ve been a middling team at best.
That is what the NFL MVP should be – it has been slowly turning into the player who is the most flashy over the last few years. We have to really remember the MVP is for the most valuable player – not necessarily the player that did the coolest things. At the beginning of the season, the Ravens were projected to finish around 3rd place in the North – but suddenly people are going to say he has a great amazing team – I don’t think so. Lamar Jackson was fun to watch. He led the league in TD passes with 36 – and he lit up the ground with 1206 YDs on the ground rushing, giving him a total of 4333 yards of offense he was responsible for.
Pretty top notch.
Conventional, no.
Everybody’s cup of tea, no.
But a weapon on the field, absolutely. How long his career lasts, who knows – but for now, his timing and rushing ability was pretty phenomenal to watch.
Lamar Jackson was the #1 reason Baltimore won the games they did this season. And without the 23 year old – the Ravens would never have accomplished much of anything nearly as to what they did during the 2019 campaign.