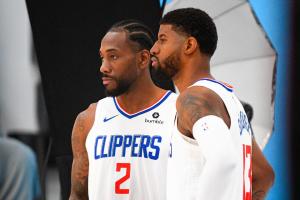 The question after every off-season transactions always is the same. Are the teams better than it was last season? Obviously no team wants to sit stagnant, especially if one of the bottom tiered teams that is looking to generate a league buzz and get better, and compete.
Adding Kawhi Leonard and Paul George to LA brought some serious talent to a rusty team dynamic – that just wasn’t getting it done. Adding MVP-like player like Leonard is immediately going to help make any team better. And then LA also picked up a 9 year vet Paul George – who buried 39% from deep last year, as George hit big shots all season for OKC last season. The Clippers have thrived with him on the court since his arrival in LA. Kawhi Leonard’s stat lines don’t tell the full story with his play, he brings a quiet leadership and a cool calmness over anything. Kawhi is definitely an offensive upgrade to the SF position over Danilo Gallinari – and, with his ability to handle the ball and create his own shots, he brings more fluidity to the game for them. And Leonard – known around the league as “The Claw” – impacts the game at the defensive end as well, bringing a great instinct and quick hands, verified by his career 1.8spg and career 100 def rating.
Leonard knocked down 49% of his shots last year in Toronto, and led them to the championship – who could possibly complain about that? He has been their key roll man on the pick and roll during this season, and he has done excellently there as well. He gets himself involved all over the court, and when he is spotting up, he’s been hitting 46% of shots from the field this season. Kawhi also brings some post up opportunities – and defensively, we know he’s been more than pretty good as well.
Paul George is a superstar player who is often overlooked – and he is currently dominating from behind the arc for them – a spot that has produced 3+ three pointers /game, along with hitting 39% from deep. And despite all of his really sweet numbers – the biggest impact he brought to LA has been a massive impact on floor spacing – when George is on the floor, the Clippers 4th ranked offense runs like butter. To the point – where quite a bit of the teams offense runs through him, and that’s how it should be with PG13 landing on this team.
When Shai Gilgeous-Alexander was the teams SG he made the Clippers young and they weren’t gelling as they should have been – that’s why LA decided to go in another direction. Not that he is a bad player by any means – and he is going to have a very good career – but he didn’t create the mismatches, and he also seemed to struggle against bigger defensive guards. Paul George is a very capable scorer against better players and is a defensive upgrade, as a plus.
LA has some talented young guys, like 22 yr old Landry Shamet – who will learn so much playing with great players like George and Leonard – these 2 superstars will handle the load and live up to their names and expectations. This has been a huge win for the Clippers. This team will only get better during the season, and as I expect them to, the Clippers are going to be a 55 or more win team. LA had a couple of things that needed to be worked on, and with Kawhi Leonard and Paul George – those things look like they have been fixed.