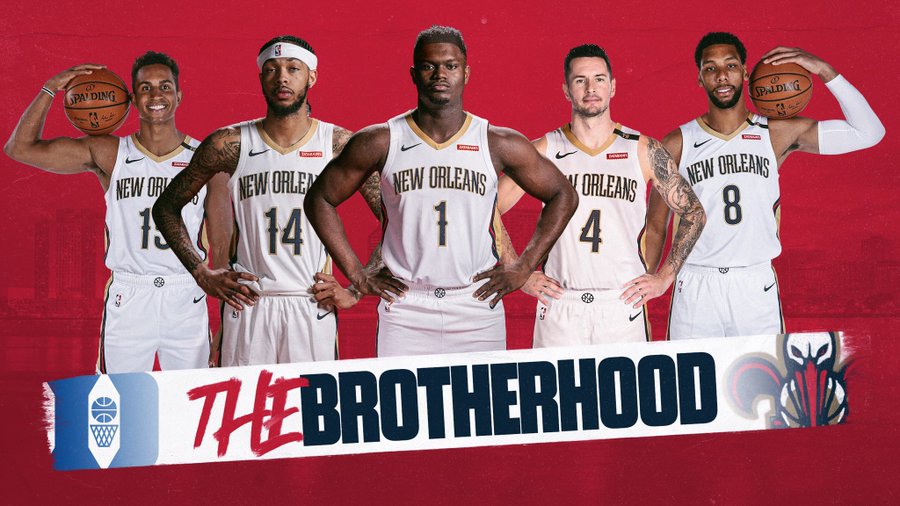 New Orleans surrounded Zion with some really good supporting talent, dropping Ball and Holiday in their backcourt, as they are 2 of the better wing defenders in the game, along with Zion, who himself is a strong defender. Then they added 6-9 Ingram as a 2nd scoring option and he has been awesome with his 25ppg and JJ Redick as their screen shooter. Plus Jaxson Hayes and his “oop” machine ability, the New Orleans Pelicans will be in the playoffs very quickly.
Zion is going to be the star for New Orleans, he is a middling shooter, a good defender, and strong rebounder, and an instinctive passer. Williamson struggled with a steady jump shot, hitting only 24 trey balls in 33 games in Duke, and players in the NBA aren’t going to leap out of his way like they did in college. It is going to be fun to see how his game style translates as the season goes on – he isn’t going to push everyone around in the paint anymore, at 6-6 and 285lbs. But already he has shown his exceptional basketball ability at the next level with 22ppg and 8 boards /game.
In the trade they made with the Lakers – the Pelicans in the long haul, will be better than the Lakers. Lonzo Ball is a great defender and passer, Ingram has more than shown his ability to light it up while waiting for Zion to get healthy – and will be a great 2nd scoring option to Zion, as his smooth touch and shooting off screens, has shown. And Hart will be a great 6th man with his shot selection and rebounding ability and Hayes will give them another solid player, especially on D.
This trade will go down as a Vikings – Cowboys Herschel Walker level – trade over time. Which we know made Dallas the team of the 90s. The Pelicans are going to be set up for a decade. This trade was all or nothing to get James a ring in LA, and he very well might get it this year. We all know, the fans, the management and certainly LeBron needs it. The biggest worry in the back of my brain I would have, if I am a Lakers fan, is Anthony Davis staying healthy. And if Davis is going to keep improving his production as he has, he has never played a full NBA season since coming in the league back in 2012 – which could be a huge concern for LA. If the Lakers don’t win a title in the next 2 years – we will all talk about how this trade destroyed the Lakers. Getting rid of everything they did is a lot to dish for just one guy – even if it’s a star like Anthony Davis.
So the true impact of the trade will remain to be seen, the Pelicans got some promising young players with their trio of 1st rd picks, and with their potential, and skills – I still feel they will win the trade in the long run. Their strength will be offense – New Orleans is going to eventually have one of the most feared frontcourts in the game, and the backcourt defense should get even better – as Lonzo and Holiday are both excellent. I like the Pelicans team really because of their system, and they’re going to run – which will be great for Lonzo’s game. With guards that can move the ball with speed, and Ingram and Zion both can run as well. A basketball team can be turned around with 1-2 guys who are top notch players – the Pelicans have their guys to go with. These guys all bring scoring and hope to New Orleans. This was a haul for the Pelicans and it sets them up better for down the road then the Lakers. With Ball, Holiday, Ingram, Zion, Hart and the 7-0 foot Hayes – who has great shot blocking ability and is going to be a supreme lane clogger for New Orleans in time. They will be ready in about 2-3 years time, right when the Lakers are going downhill.