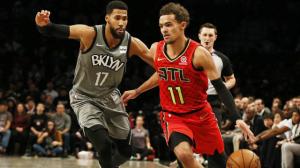 We have a young and exciting generation in the NBA right now. We have teams like the Phoenix Suns and Utah, with some great young players, like Devin Booker and Donovan Mitchell – but are they the top of the top in the age bracket of under 25?
We can talk about who is great and who is going to be great, but it comes down to who is the tops of the young age bracket right now.
Lets take a deep look at some of the top 3 NBA players under 25 playing the game right now.
So we will look at 3 of the top young guys who are balling and are under 25.
We will start with a 2nd year PG.
Trae Young; Atlanta Hawks, PG, 21 years old
Trae Young has been very good for the Atlanta Hawks – he runs the machine, he is the guy for this team, and Atlanta has a legit scoring machine , with the 21 year old, Young, at 28ppg this year. Even though defense is the weak spot for Trae – the quality of opponents in the division, has a little bit to do with his lack of ability to make plays on defense. But, he has never been a shutdown guy.
Atlanta, on offense, plays a steady pick and roll game on their bottom ended offense, but he excels with scoring the ball, and he gets a shot off all the time, and is never shy about looking for his shot either. With 20 FGA in 66% of the games this season, as of this article. He is easy to play with due to his ability to hang pts on the board – but Atlanta is a team that has no other realistic scoring options or any likely chance of making the playoffs this year.
Oddly enough, Young has a problem with knocking down shots. Hitting just 44% of his shots on the season – and hitting just 42% over the last 2 seasons, this has been his glaring problem for some time. Young seems like he would rather defer to someone else to take it over when the chips are down. He seems to be passive at times – a guy who is afraid to take the big shot. This could be based on Young only playing 1 season in Oklahoma – he may have not have learned the cold hearted assassin thought for a leader for a team.
When the game becomes tighter and rolls into clutch time – teams can lay off him & force him, it seems he lacks confidence that is really needed in that area. Teams aren’t going to be afraid of his below 45% shooting percentage.
Luka Doncic; Dallas Mavericks, SG, 20 years old
Luka Doncic takes everyone he plays to school on the court and he has been lighting up the NBA for 29ppg and almost 9 assists /game for Dallas – he has been just outstanding. Luka has been in the league for just 2 years – and has shown he is something really, really special. His scoring has been amazing to watch and his overall game is just incredible.
The 20 year old has been outplaying seasoned players with 5, and 6 years behind them – Luka is the future of this league – hands down. He is still getting down shooting the trey ball – knocking down just 32% of his 3pt shots – but he has a spectacular mid range game and is a treat to watch with leaners, and sweet jump shots. The Slovenian SG is a pure shooter for sure – he doesn’t waste his shots with crazy double covered shots – he is fun to watch scoring. He scores when needed for the Mavs – and is virtually unguardable, scoring 26+ in 76% of his games this season, as of this article.
Brandon Ingram; New Orleans Pelicans, PF, 22 years old
Brandon Ingram has been injury prone over his 4 season career with 26.5 games missed/season since 2017. Which really sucks – no one wants a talented scoring option like him, to be absent for 32% of the year – and Ingram missing games seems to be clockwork every season. It is just waiting for the time, when he go absent. Again.
The former 2nd overall pick is a beast with his natural scoring ability. Obviously Giannis Antetokounmpo and Anthony Davis are better overall at the PF position – but Ingram is just 22 years old and Antetokounmpo and Davis are older and more experienced – give it time, I think Ingram is going to be a long time superstar and could be in the same classroom on the court with either one.
Brandon is a great asset to the Pelicans and is only going to get better – especially when Zion Williamson arrives.  He has rebounding, at 7 rpg- and is improving his overall defense, and he has brought rock solid scoring over the season, each and every game.
If challenged to pick 2 guys to win a championship – it’s coming down to the slender Ingram and Doncic – as I would think many feel they are the top 2 playing under 25, right now.
Imagine how good Ingram is going to be in 2-3 years from now, he is guy that has sweet scoring and shooting ability, but needs to get better with his training, he needs to stay on the court.
I grasp what Ingram and Young are – but Doncic is better.  A better player, a better leader, and easily a better shooter. Luka is only 20 years old and putting up top of the league like numbers, people need to realize that he is a transitional historic player – one that ruins a games gameplan.
Numbers don’t lie.
29ppg, 10rpg, and 9apg are just ridiculous.
What other guys are doing – is nothing close to what Luka is doing. He can play the game of basketball – bottom line. He can play with the best of them in the league. Luka and his pure scoring ability has opponents asking what kind of sorcery is being unleashed when he is on the court.