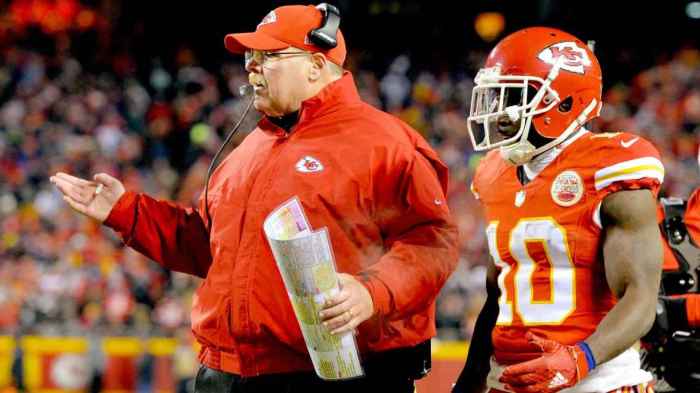 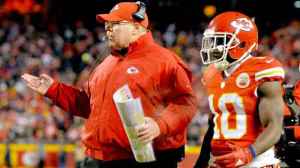 At a height of just 5-10 Tyreek Hill was a former WR for West Alabama – and in 2016 – Hill went into the NFL draft, where the Kansas City Chiefs picked him deep into the 5th round at 165th overall. He was a natural “raw” talent coming out in 2016 in the draft and was nowhere near seen as being as big a grab as he has been. The Chiefs did not whiff on their WR pick – like they did in 2015, with their Chris Conley pick in the 3rd round the year prior with a very unremarkable 1806 career receiving YDs and just 8 TDs in 64 games. Through his 1st 54 games, Hill is having an impact that even Hall of Famer WR, Marvin Harrison didn’t quite have at this age and stage. He has put up 3798 YDs and 30 TDs – and Harrison put up 3187 YDs and 29 TDs during the similar period in his career. There’s something to look at there, and now here we are – 4 years later, and Kansas City is reaping the great benefits of the 25 year old Tyreek Hill – while he is leading Kansas City to a 7-4 record, and a potential Super Bowl favorite.
A big reason for Kansas City’s success – has been the fantastic play of Tyreek Hill – Hill and his explosive game for Kansas City has been very impressive to watch every game. With many bigtime games in his 4 years in the league, he has already had 12 games of 100 YDs or more, and 23 games with a 17+ YPC or more as well. He has been far more than just a gimmick guy, but an incredibly valuable weapon that has the instinctual ability to take a 3 yard slant 90 yards in a flash – which has been his calling card. His electric speed is something more than the Chiefs expected in the game. WRs rarely develop such a quick adaptation of the game from college to the pro game – much less before their 26th birthday.
Hill is built for the big stage, and playing for Kansas City – he is always dealing with the big stage. A team that has been battling for the top spot in its division for years, and the ever dangerous QB, Patrick Mahomes. The speedy wideout has put up a huge 215 YDs vs the LA Rams and 169 YDs and 2 TDs vs division rival LA Chargers last year, with games like this under his belt, Hill has made a monstrous difference for Kansas City. He has been beyond just serviceable for the Chiefs – and I’m convinced that Hill is as good as he appears – with his big play ability and breaking speed. He has shown the eye popping ability to blow teams away deep and that he is a special weapon. He is more sure handed than many other WRs – with just around a 3% drop ratio – which also puts him ahead of star WRs, Odell Beckham and Keenan Allen currently.
Hill is something super special and easily one of the top WRs in the league. As always, with any great player – as long as the 5-10 WR stays healthy he will go down as one of the greats, and will very possibly end up in the HOF himself, someday. He will help lead his team to great places. This guy is only going to get better – he can already create immediate space – which is huge for any WRs. The Chiefs have to be beyond ecstatic they have him – because his brightest days are still ahead. We’ll see where things go for Hill and Kansas City – but I think the Chiefs should be very encouraged by the game Tyreek Hill has brought to their team.