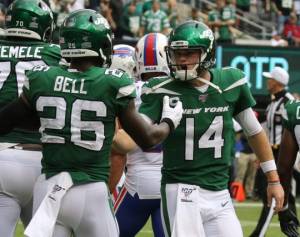 The Jets have had their share of screw ups with drafting QBs over the years. Drafting Geno Smith in 2013 at the 39th overall spot, less than 6000 YDs and a 58% completion rate later – he is gone. Smith drudged up good pocket passer comparisons – but he suffered with – not being able to complete passes. Chad Pennington back in 2000 at the 18th position, who was weak armed and injury prone. Mark Sanchez and 5 spot – he is no longer there. “The Sanchise” helped the Jets to the playoffs – but he of course faded away as the team did. And of course, Christian Hackenberg in 2016. Do we need to go there?
Having a true franchise QB could change them immensely
The Jets love the laid-back, Sam Darnold personality, and they don’t have to worry about him ending up across the headlines in tabloids and they have some good things around him. They have Le’Veon Bell at RB now, Jamison Crowder at WR, who brings steady hands and good route runner, and they have a Head Coach that believes in his future and his ability.
Bell can help the New York offense – and he can help dictate coverages a bit. Making Darnold’s job a bit easier, his ability to get open underneath on routes and as a check down option should immensely help Sam – last year, he didn’t have a RB who could be a threat in both the run and pass. Now he has arguably one of the best in the league with Bell being added, and Darnold struggled with underneath throws – Bell was supposed to upgrade that with his soft hands. Bell catching passes on the outside with some guys who should be able to make plays. Ty Montgomery and Jamison Crowder should be able to help open up the box for him – Crowder has the biggest upside to do that, as he brings a major slot threat.
Over the last 20 years, removing Darnold from the equation – their QBs have thrown a total of 248 TD passes to 232 ints. New York has had just 2 guys throw 20+ TDs in a season, and that was only done 2 times.
Overall.
In 20 years.
They have suffered longingly and painfully at that position. Darnold has been put into the position to have a huge chance to try and reverse their “curse.” But, the organization needs to continue to build around him.
The last QB the New York Jets had that was even considered in the top 15 QBs of the league – was who?
Vinny Testaverde?
Boomer Esiason?
Ken O’Brien?
Many feel he is very talented and now he has been able to get his feet wet – and get that valuable experience. At this point, with just 17 games under his belt, 3682 YDs, 22 TD passes, and a low completion rate – what kind of promise are we really looking at? Last year, Darnold was ok at times – but from what I’ve seen on the field – I am still not sure he’ll be a great QB in the league. I just don’t know if I am ready to believe in Sam Darnold quite yet. With 9 games of 230 YDs or less passing – 8 games of 1 TD pass or less and 7 games having completed 58% or less of his attempts. He brings some moxie to the position – but also brings some real questions – he obviously lacks experience and the veteran leadership that the Jets need, although he has demonstrated quick decision making, and is able to move the ball around some.
I want Darnold to be successful for the Jets – they need to have someone to give them hope on that team. They deserve it, after the Mark Sanchez’s and the Geno Smith’s they have endured. New York hasn’t really been a competitor for their division for years – 12 years of being in 3rd place or worse in the last 20 years, winning the division just 5% of the time. Of course, playing in a division with Tom Brady and the Pats doesn’t help – but they have finished 2nd only 35% of the time.
Still not good.
Sam needs to keep learning, and not keep making the same mistakes – any young QB should get better by playing in games – he is making some strides for the Jets – but there is a lot on his 6-3 shoulders. How much he is to be believed in – is a question only he can answer for.