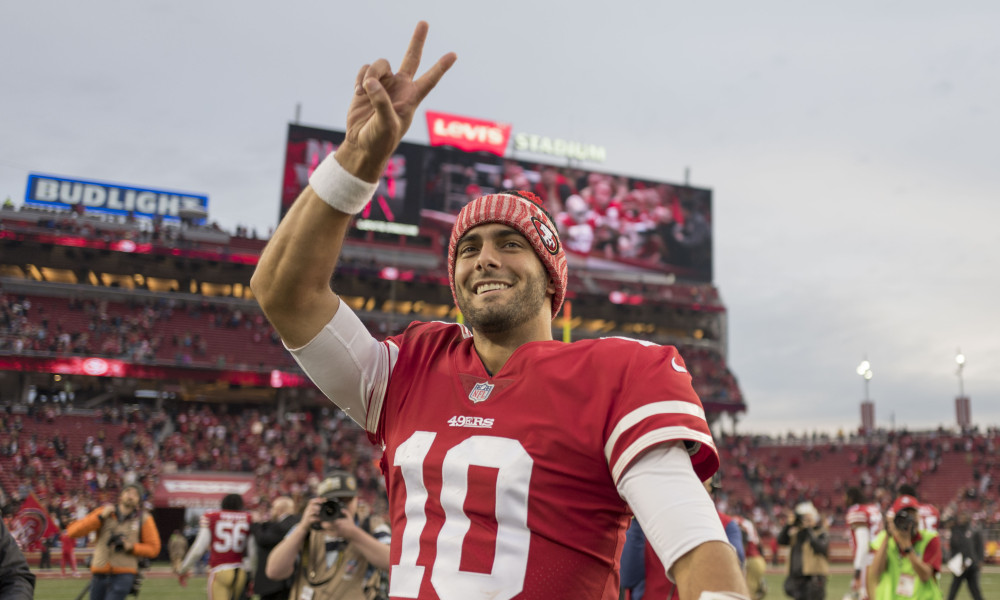 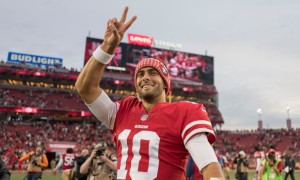 Jimmy Garoppolo is the newest QB for the Niners, and their teams play and success depend greatly on the 6-2, 230lb QB from Eastern Illinois.
When Garoppolo was drafted in 2014 at 62nd in the 2nd rd by the New England Patriots, the thought was that he was going to be the heir apparent to Tom Brady, who was 37 years old when he was drafted. 16,000+ yards, and 129 TD passes later, Tom Brady is still the QB1 for New England and Jimmy Garoppolo is now slinging the ball around in San Francisco.
The Patriots have had a history of making a big move with QBs, like when a young upstart QB got his big shot when Bledsoe was hurt, and unable to play, and Mr. Brady never rescinded his position. Could this ending being another huge QB move for the Pats, almost 20 years later?
It didn’t take very long for the San Francisco 49ers to realize that they wanted Garoppolo to be their guy, as they signed him for a 5 year deal worth $137 million dollars. This, after playing just a handful of regular season games but, going 5-0 for San Fran. Garoppolo has built a budding career as a starting QB, even if we have just seen 7 full games of him in action. A bit quick, yes, but really, if you are a hungry Niners team are you going to let the opportunity to have a potentially great QB just slip by for your franchise? Although critics complained the 49ers fell in love too fast, and if it doesn’t pan out its going to hurt the team for years.
San Francisco brass is also really doing a great job bringing in quality offensive players, with Jimmy Garoppolo, WR Pierre Garcon and utility RB Jerick McKinnon. And the acquisition of CB Richard Sherman is going to invigorate a 22nd ranked passing defense that was lifeless at times. As Richard Sherman made his choice in joining the Niners due to the buzz and promise that Jimmy Garoppolo brings to the team. Great QBs are not easy to come by and clearly make a big difference in the NFL.  The Niners made their move, and made a loud splash with the 26 year old.
One thing to point out is that Jimmy Garoppolo never had a stud WR in San Francisco like Pierre Garcon before either. And Garcon has the ability to get the team 75+ catches for them. And with Garoppolo at QB, and assuming Marquise Goodwin plays to his potential, along with Garcon that’s a pretty decent starting trio to have on the field. In the last 5 games as a starter, Jimmy G had a 8.8 YDs/attempt ratio. Which is far better than other QBs the Niners have had in quite some time. He is a legit QB talent who has really good pocket presence and makes the right pass when needed.
The NFC West division is looking like it is going to be very, very good for the next couple of years, with Seattle and the Rams. The Seahawks have an exiting offense but have some major issues in the D, the Rams have huge amount of momentum with their explosive offense and monstrous defense and will need to continue to play well. Then the growing hope of the Niners brings a 3rd team to the table.
The 49ers are so hungry for a competitive team to be on the field again. And there is no reason to believe they cant find a way to get 8-9  wins this coming season. If Arizona has managed to find a way to squeeze out 7-9 wins each of the past 2 seasons with the limited talent around on that team –  I don’t see how San Fran can’t get at least as much out of their team.
Jimmy G won’t let the 49ers beat themselves, he doesn’t throw bad picks, he is smart and accurate. Garoppolo didn’t immediately hop in with any top end receivers that struck terror in any defenses. He created chemistry with Marquise Goodwin and George Kittle – and he was fearless when it came to throwing the ball deep. Now with more time to work with his weapons, Garoppolo will have the Niners in almost every game. San Francisco had no steady QB success for numerous seasons leading up to Garoppolo becoming the starter late in 2017 – he appears to be as ready to take over his team as they come.
The San Francisco 49ers were a crippled hobbled mess of a franchise, Jimmy G is the fix that will get this team walking with their heads up again.
One thing for sure, the Niners will be fun to watch again and VegasTopDogs will have all of your winning action.