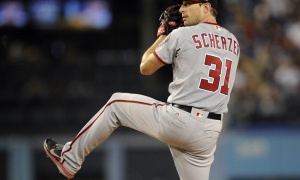 What Max Scherzer is doing is just well classic Max Scherzer. This guy is off the baseball hook right now and it seems that nobody can stop him. The bookies keep the juice flowing on this kind of pitching consistency and the only way to beat the man is by doing just that; laying the juice. It’s tough to lay -220 but it is what it is. Sooner or later he will lose a game and the juice will come back down to earth for the next game.

The Nationals are coming off of a tough road weekend in Atlanta where they dropped three of four games and are now trailing the Braves in the NL East by 1.5 games. Unbelievably, the only win in Atlanta came on Saturday in extra innings when Scherzer hit the game winning single in the 14th. Scherzer’s last outing was a dandy with 12 strikeouts in 8 scoreless over Baltimore to record his 150th career win.

The Nationals are not a team to be betting on right now, as a matter of fact, they might be a good team to bet against! Scherzer is whom one should think of betting on. He is simply lights out and he gets wins. How long can it continue? As long as he stays healthy. Could we see a 25 game winner this year in baseball? Yes, and if anybody has the chance to do it, it’s Max Scherzer.

Run Lines: Should you bet them?

Yes, yes, and yes, you should absolutely bet them and especially Max Scherzer, he gets run supports. Check out the stats…

As you can see from all nine of Scherzer’s wins, he gets run support. He has covered the run line in every game with exception of his one loss on April 4th to Atlanta, 7-1. This guy is close to being a run line– covering juggernaut. When he takes the mound, the Nationals show up to play ball and the not only hit, they play defense. Seven out of Scherzer’s nine wins have come by way of the road. This guy is fearless and will go after anyone on any day in any ball park. He is intimidated by nobody.

10 Star Picks – Warriors Take Commanding Lead,  Where Do the Cav’s Go from Here?

Here is the good news, on Tuesday night, the sportsbooks have the runline set at -120. Now the numbers tell you that this is a bargain. Could he have an off night, of course, it’s not likely but it could happen?  All pitchers have an off night every now and then. Scherzer won’t win every game he starts but he will win a pile of them. Only four of the nine wins listed above, were won by 2 runs or less. The rest of the games were won by 4, 3, 13, 8, 3, and 4. These are the kinds of numbers that sharp players look for.

If you find yourself frustrated with high priced money lines (and who doesn’t) it pays to do your homework when it comes to runline betting. You can save a lot of money and make a lot of money. Sure Scherzer could lose, there is no guarantee and this is exactly why they call it a gamble. But you can bet the farm that Scherzer will get right back on the horse and continue winning. He’s a great play on the moneyline wager.