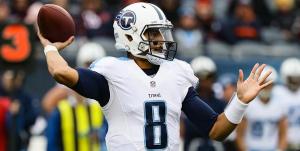 He’s the real deal and should have a career year in his third season as a pro. His numbers have improved each season and another year in the same system can only help. If you wait on QB than grab Mariota in the mid rounds.

While I’m not a fan of the Bucs’ offensive line, Winston has the size, seed, and poise in the pocket that screams superstar. The receiving corps are better than you think. Lee Evans is pretty close to being the #1 receiver in football, with sincere apologies to Antonio Brown, Julio Jones, Odell Beckham Jr., A.J Green, Dez Bryant, Jordy Nelson, and Doug Baldwin. If you wait on QB than grab Winston in the mid rounds.

Corey Davis was the fifth pick overall (Western Michigan) in this year’s NFL draft and will not be a bust. He’s been slowed by a hamstring injury but should be ready for the preseason finale. Great size, good speed, and uber talented. The 2016 Mid-American Conference Player of the Year is the all-time leader in major College Football in receiving yards (5,285). Eric Decker will draw all the attention after signing in the off-season. A little ironic since he’s been compared to Decker quite often. Grab him as a mid-round sleeper.

Can’t believe he fell to the third round. The Lions got arguably the steal of the draft. The rules benefit the passing game and Stafford is better than most. He had a career-high 71.6 QBR last season. Kenny is big, physical, smart, and should prove to be a big-time red zone target threat. Grab him in the late rounds.

Extremely talented with superior focus equals superstar. The Raiders are going to throw the ball early and often. Plenty of red-zone targets that should produce 10+ touchdowns with over 1,000 receiving yards. The offensive line is very good and the chemistry between Carr and Cooper is off the charts. Don’t be afraid too grab him by the fifth or sixth round.

The Vikings offensive line is above average in the running game and head coach Mike Zimmer likes to pound the rock. I see him going in the 3rd round of fantasy drafts after dazzling in the preseason. Playing the majority of his games (10 of 16) indoors is a huge factor. His elusiveness plays well indoors. Get him!