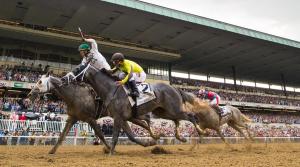 Jeff Hochman of VegasTopDogs cashed with long shot Cloud Computing in the Preakness for all customers/followers. Lets hope for the same result in the last leg of the Triple Crown on Saturday June 10th, 2017.  With no clear cut choice, I have another huge value play which should hover around 15:1 by post time. Here’s my selection with analysis to follow.

Twisted Tom has won three consecutive races and seems to be getting better with each victory. His sire (father), Creative Cause, was a Grade 1 winner in an abbreviated racing career and is by good stamina sire Giant’s Causeway. In addition to carrying name appeal for fans of the Eagles’ “Hotel California,” his dam Tiffany Twisted won at 1 ¼ miles during her racing career and is by 1995 Belmont Stakes and Kentucky Derby winner Thunder Gulch. Shortly after Cloud Computing won the Preakness Stakes, trainer Chad Brown said that he actually thought the 1 ½-mile Belmont was a better fit for Twisted Tom. His connections have been training and preparing him for this exact race. ‘Tom’s dosage index of 1.13 suggests this monster of a horse will thrive with extra distance. Love the fact that Javier Castellano is aboard for trainer Chad Brown just like the Preakness. I like #1 Twisted Tom for Win, Place, and Show in a shocker!