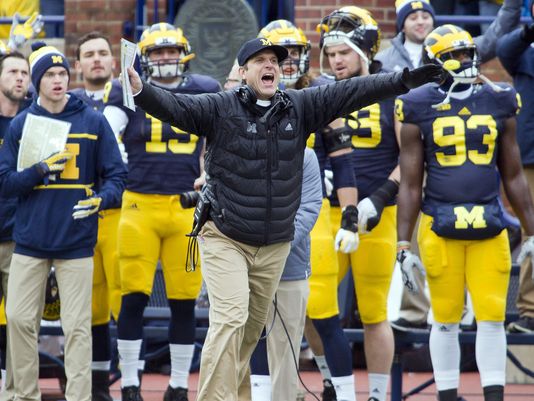 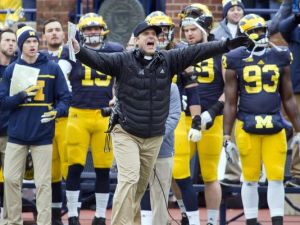 1 – OHIO STATE – Are we really going anywhere else here? Urban Meyer is an unbelievable 31-1 in regular season Big 10 play. How can we go against him? I mean, I get he has 3 returning starters on both sides of the ball. But until I see otherwise, Buckeyes get the call.

2 – MICHIGAN – Jim Harbaugh returns 14 starters and is looking to knock off Ohio State. The schedule is a tough one. At Michigan State. At Iowa. They are on the road to end things at the Big House. That should decide who wins the Big 10 and goes to the playoffs.

3 – MICHIGAN STATE – Mark D’Antonio only has 10 starters back and lost his big QB who led the troops. I think they can’t repeat a 12 win season. But the drop off will be there. Besides the 2 teams above them, Penn State is really the only team now, or a year from now, away from moving to the upper levels here. We know the defense will be stout and the run game will look to take pressure off a new QB.

4 – PENN STATE – Another nice recruiting class to add more depth here. They lose an underachieving QB, but still return 9 starters on offense (6 def). HC James Franklin is building back this program. But they are not ready to compete with the big boys yet.

5 – MARYLAND – Another new HC as DJ Durkin takes control of the Terps. This is a pretty experienced coaching staff, so I think they can reach the troops and get them out to a fast start. 4-0 looks possible and if the pull off a road win at Penn State, I can see them at 6-0 before facing Michigan State. I think these guys go bowling and rebound nicely from a 3 win season.

6 – RUTGERS – Scarlet Knights bring 16 starters back (9 off 7 def) and our looking at a fresh start with new HC Chris Ash. This team has some talent and I think the new direction will have these players motivated to overachieve as they have done in the past. Iowa, Ohio State and Michigan b2b2b is surely 0-3 and probably gets ugly. It will take a little luck and an upset or 2 for a bowl bid.

7 – INDIANA – I think Kevin Wilson has his work cut out for him here. When you lose your QB and RB to the NFL and you are a team that was 6-7 last year, you are in for growing pains. Look. I thought this team would be bowling last year. They improved in wins along the way. 6 wins can be reached if they get some good QB play.

1 – IOWA – After going 12-0 the Hawkeyes look to rebound after losing the Big 10 Championship to Michigan St and getting slaughtered by Stanford in the Rose Bowl. This isn’t a sexy group, but does return 8 starters on defense, 5 on offense. Having a senior QB should make 5 Big 10 road manageable, especially since none had winning seasons at home LY. I can’t see another undefeated regular season, but I think they win the west.

2 – NEBRASKA – If anyone is going to rise to to top here and overtake Iowa, the Cornhuskers are my favorite. Look. they were disappointing last year in Mike Riley’s first season. They lost 5 games in the final seconds. They could have easily been 11-2! Woulda coulda shoulda, but a coach like Riley will have his guys build on those losses. 2nd year of the new schemes. They were better than their record last year. I won’t be shocked to see them represent the west in the Championship Game.

3 – NORTHWESTERN – I think they overachieved a bit last year and I can’t see them winning 10 games again. I think they are a hair better than Wiscy because of their defense. They need to be at worse 3-1 entering October because there are 3 losses waiting for them in Iowa, OSU and Michigan State.

4 – WISCONSIN – The schedule is brutal here. Opening against LSU. Then a 4 game stretch of at Michigan State and Michigan, home for Ohio State, road game at Iowa. They were 10-3 last year and could easily be 2-5 in October.

5 – ILLINOIS – Giving Lovie Smith the 5 spot here. He has some decent pieces back at QB and RB and 7 starters back on offense. The D has only 4 starters back so that can be a problem. I just think the new direction will infuse some excitement into the program. The kids will be run through walls for an NFL guy who I am sure is promising to get them ready for the next level.

6 – MINNESOTA – These guys were 5-7 last year and went bowling! Thank you NCAA for watering down the post season. 13 returning starters and that bowl win will have the Gophers with some pep in their step. No Ohio State or Michigan on the schedule. Might get the bowling shoes ready.

7 – PURDUE – All you need to know about the Boilermakers is this. Under HC Darrell Hazell they are now 2-22 in Big 10 play. 8 starters back on both sides of the ball. Does that even matter. They were 2-10 last year. The guy never sticks to a QB. Hot seat? How about absolutely on FIRE. Maybe they steal a game somewhere. But I won’t be shocked if their only win is over Eastern Kentucky.

Written by Sean Higgs as he is ready to tackle Big 10 Football!  Be sure to check back daily for other College Football Conference Previews