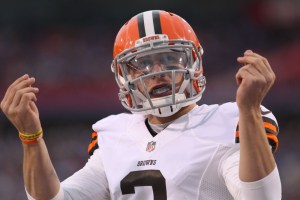 Johnny Manziel has been called a lot of things. One thing he hasn’t been called is a mature young man.

But Manziel deserves a chance to start this week against Oakland. That’s not going to happen as Cleveland coach Mike Pettine already has named Josh McCown the starter. McCown has recovered from a concussion he suffered opening week.

The Raiders have lost 12 consecutive road games. That string extends to 15 in a row when they play in the Eastern Time Zone.
Pettine trusts the 36-year-old veteran McCown to take care of the ball better than Manziel. I understand that. Pettine needs all the wins he can get with his job likely on the line. McCown is worth a half to one-point more on the betting line than Manziel.

I find Pettine’s decision short-sighted, though.

Manziel can make plays that McCown, who is near the end of the line, can only dream about. Manziel can escape pressure not curl into a fetal position like McCown does when he sees pass rushers in his face.

It’s not like the Browns are going anywhere this season. They may not be favorites in a game the rest of the season.

Cleveland needs to give Manziel game experience every week. The Browns need to find out if Manziel has what it takes to be a quality starting quarterback. This just gives him one less opportunity.

Written by Stephen Nover of VegasTopDogs.com