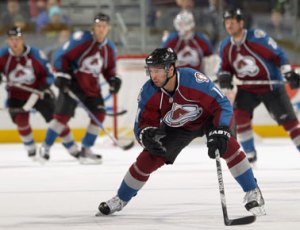 The Western Conference playoffs in the NHL are notable for the fact that in each of them, the higher seed has won each of the first two games at home. That’s not very typical for the NHL playoffs.

The Blues lead the series, 2-0, but they will very likely be without David Backes, who was concussed when he absorbed a violent and illegal hit from Chicago’s Brent Seabrook in Game 2 of the series on Saturday. Seabrook won’t play this game because he has been suspended through Game 5 for the hit. It will be interesting to see which team suffers more without an important player. The Blues know that if they can win Game 4, they will be up 3-1 at worst and might even have a chance to sweep the defending champions out of the playoffs in the first round. That’s a big prize for St. Louis in this game on Wednesday.

The Avalanche lead the series 2-0, and they lead it because whenever they’ve fallen behind, they’ve immediately been able to respond with a tying goal. It gets to be very demoralizing when your own goals are promptly erased by an opponent’s quick-strike goal. Minnesota has to be more steadfast and resistant on defense. Otherwise, it won’t be able to extend this series against Colorado.

The Kings took a 2-0 lead in Game 2 on Sunday night, hoping to tie this series at 1-1 and send it back to Los Angeles in a good position. However, San Jose then scored seven unanswered goals to blow Los Angeles out of the water. It’s really hard to see how Los Angeles can engineer a turnaround in the series. The Kings have been so comprehensively outplayed, and when that happens, it’s hard to say that it’s a matter of one adjustment here or there. San Jose has firmly established itself as the favorite in the series.