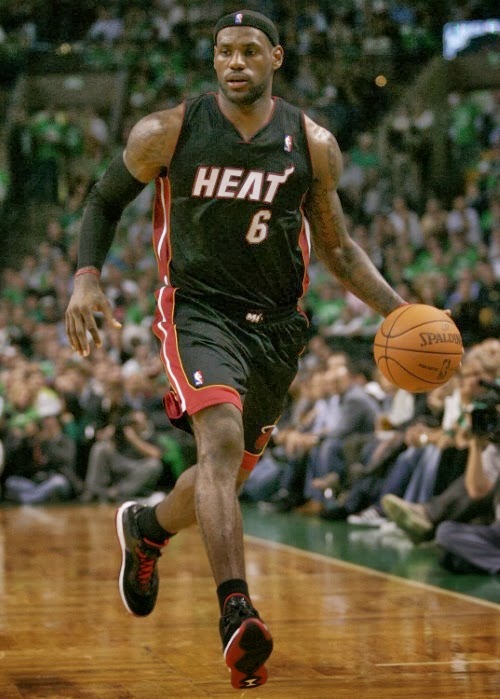 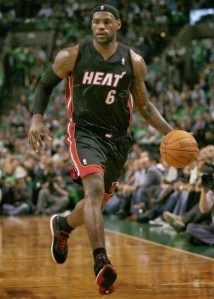 LeBron James set a career-high and Miami Heat franchise-high by lighting up the Bobcats for 61 points. James ripped apart the Bobcats with an awesome shooting effort knocking down threes, hitting jumpers from all over the court, shredding a defense, which is giving up only 97 a night to opponents on the season, and is holding opponents to ratty 44% shooting on a nightly basis.

Recently 80’s superstar Dominique Wilkins kind of dropped a bomb on LeBrons massive night, stating that he could have scored 40 points under the same conditions. The 54 year old Wilkins seems a little sensitive to me. Granted Wilkins gives rightful credit to LeBron for his

athleticism and skills, but making this statement is pure idiocy, and is only a soiled point to take a shot at one of the NBAs best players.

When Dominique was 39 years old, playing for his 5th team, he was scoring 5.0 ppg. And scored 12+ only 4 times on the year. So, let’s crush that concept of ‘Nique lighting up the Bobcats now at 54, can we? So why is Dominique going off on James’ night of significant explosion?

It kind of seems to me that “Nique is staying strong with his old school roots, that the NBA is a watered down product than it was in the 80’s when he was playing. And in some facets he is right. This generation of players, are given much more freedom to play than in the 80’s when players banged hard and less was called, hand checking was allowed, and teams like the Pistons slammed you repeatedly over and over throughout games.

But for Dominique to make the statement of eras is a stupid opinion. Wilkins was able to score, and he was a big scorer in the day, I had watched him light it up on more than one occasion. But, ‘Nique was not a good shooter. Let’s be completely honest here. For those who want to bang on LeBron not being able to shoot, are you kidding me? Those days are long gone, James can straight shoot the ball.

Ok, no more with that asinine moot point.

Wilkins won a scoring title in his career, and 2 times scored a 57 points in a game, his personal best. But for someone who had no jump shot, he was a 31% shooter from deep, I’m not sold that he would have knocked down the shots LeBron did against the Bobcats.

It does at times seem like many of the 80s guys have some intense resentment against the kids playing today. When you look at numbers, when ‘Nique was playing, there were consistently a handful of guys scoring 25 PPG. Makes you wonder was the defense really that much better then, or were the players really that much more talented?

Just like when we grew up watching Bird and Magic, we all knew for a fact that those guys from then were better than most of the great players from the 60s. There was no way Tom Heinsohn could match up with Bird.

You get what I’m saying here?

Seriously, there is no way Kiki Vandeweghe or Dale Ellis was scoring 25 in today’s NBA, they didn’t have the game that is needed for today’s game.

Unfortunately, it seems that Lebron cannot seem to get a break. People want to say he is not great because he didn’t win a title, he then goes and wins 2. Back to back, mind you. Now his 61 point performance is being picked apart.

‘Nique, your time is long gone, you were very good, but you were not even close to being as good as LeBron is.