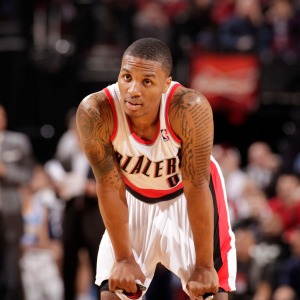 So far, the Portland Trailblazers season has been nothing short of startling as they have shocked many after a very disappointing season last year. Personally, I have been watching the development of the Blazers over the last 4-5 seasons and have seen the talent building and developing on the team since 2009 and especially since the emergence of LaMarcus Aldridge becoming a main factor in the teams offensive scheme. The Trailblazers have been excellent this season, in particular on the offensive side of things, putting up 109 or more a night, on the regular. Even against the better defensive teams like San Antonio and Charlotte, where they have scored easily.

They have a very high talent level on the team, led by LaMarcus Aldridge who is a monster to defend, with his great game and in particular his coercive stye of play. And they also have great back-court play with Damian Lillard and Wesley Matthews who are establishing themselves as arguably one of the best guard combinations in the NBA. between them they get the Blazers 38 pts, 8 rbs, 9 assists and they don’t turn the ball over when they have it. And they are driving to the hole as well as hitting the long ball, hitting 42% on the season so far.

The leadership on the team is markedly built around Aldridge who over the last 4 seasons has continued to become one of the premier power forwards in the NBA. his frame, standing 6-11 and a brawny 250 lbs, he is a load to handle when he gets down low, as well as a respectable 10-12 foot game as well, to pull out other defenders on him. He can easily command a double team most nights, which allows other stars like Matthews and Lillard to get good looks at the rim.

But for a serious playoff run, let’s look at prospective feasible teams they could run into and how they matchup. The West is markedly and obviously the much better of the 2 conferences this season, by vast strides. So with that, They would have a much tougher task to make it to the NBA Finals than the easy front runners from the East, Miami and Indiana, who essentially only have to win against each other, and they should get to the championship.

The Western conference has bottom ended teams in the lower end of their playoff setting currently, that would be top 4 ended teams in the lowly Eastern conference. how does Portland matchup against the top 4 in the West? OKC, the high flying, MVP level play of Kevin Durant makes them exceptionally the favorite in the West of course, but the Blazers match up well against them, they have been able to get up more shots, leading to straight outscoring them and have not turned the ball over vs them either.

San Antonio, the never say never team, that honestly just amazes me with their play, they are a true phenom to me. The Blazers can own them, with their fast style of play against them, because of good shots on the break. The Clippers, the new Los Angeles team for the future is a mainstream love, and they play a highly influential defensive style which could cause of concern for Portland because of the quick hands and big bodies inside the paint.

As history has shown us over the years, a good defense typically wins in the NBA. An NBA champion, plays a gritty “stop your opponent from scoring” game and they have a star player who can score in bunches when need be. As well as having a strong bench, and getting improved depth has been important. They have gotten by so far, because their defense doesn’t have to be outstanding because the offense has been so efficient.

Portland doesn’t have both of these attributes at this point. they are built on offense, and until they strap it down on the other end of the court, they will struggle against the better defensive teams still to become a NBA champion. Once they establish a tighter defense, the sky is truly the limit, because they can match player for player with anyone in the West…yes anyone.