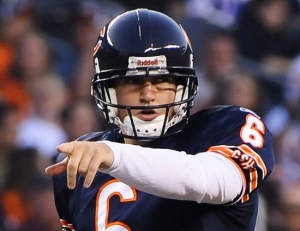 Jay Cutler at QB for the Bears has always been an engrossing story to say the least. Cutler has been known for his pouty, temperamental ways and his nearly maddening gifted, and nimble game as much as his big arm, and gunslinger mindset but in the same sentence, he has also been disappointing to many.

For Bears fans, let’s bring them back a bit, shall we? They recently signed Cutler to a long term 7 year contract, solidifying him as their starting QB likely until his retirement. The question immediately rises, can the Bears win it all with Cutler leading the team downfield? But look at the alternatives they had, 1st and foremost, they had to sign him. Who else did they need out there? They weren’t going to draft a QB this year, not happening, and what other QBs were out there to pick up, and largely why would they?

The Chicago Bears had the 2nd best offense in the NFL this season. Why? Because of Jay Cutler, that’s why. There is no reason to muddle with a machine on offense the way they ran this year, scoring 28 a game, and Cutler throwing 19 TDs, while missing 5 games on the season, they did pretty good, I would say. The Bears seemed to ultimately give him some time to pass the ball out to his WRs, and they scored 24 or more 10 times on the season, including 6 times 30+ again not so bad.

Let’s be honest here, there are a lot of other teams that would have paid him just as much, if not more to join their teams. He can be a QB who people dislike, with his emotions, and his mannerisms. But his team plays for him, and really in the end, isn’t that what matters most, if your team plays for you, and you keep the team moving forward isn’t that really what its about?

The Bears have had their best QB in what seems like forever, before Cutler, the last QB to throw for 3600 or more in a season, which Jay did in 2009, was in 1995 with Erik Kramer. How about the last 27 TD passing QB, that would be also Erik Kramer in 95. Cutler in his 5 years with Bears, he has tossed 101 TDs, to 75 picks, in the 5 years before the big Cutler decision, their QBs put up 82 TDs, to 88 picks. I would say Jay developed the team, evidently.

This Bears team has been one of the top notch offenses the Bears have ever had. With an offense having a franchise running back, in Matt Forte, 3 outstanding receiving targets and an ever improving offensive line. Bottom line, Jay was not the trouble in Chi-town this year. When he was 1st brought into Chicago, the team had no direction, they were a struggling squad, supported with 3 QBs in 3 years. He was standing behind an offensive line, that allowed him to get buried 110 times in his 1st 3 years there. Yet he still threw for 226/game under ridiculous pressure, and constant scrambling and running around to make a play. Chicago needs Jay Cutler, they, like several other teams in the NFL are a QB away from greatness, they have a QB who can be a 30/15 guy with 4000 yds, I seriously have no doubts.

They need to fix the actual problem.

They will go on to be good on offense, they need to instantly fix the defense. Which needs complete renovation, from top to bottom. The Bears offense is set with excellent pieces for the next few seasons, they need to rebuild that defense. Pick up a few draft picks, swing a couple trades and they could make some noise. It wasn’t Cutlers fault that the defense left Randall Cobb uncovered and wide open vs Green Bay with the game ticking away.

A Cutler-led offense with monster WR Brandon Marshall, sure handed, future Pro-bowler Alshon Jeffery, Martellus Bennett, who has been an ace and ultimate utility back, Matt Forte isn’t the problem, obviously. Make us believers Jay, shut up the naysayers, show them all what you can do. Give Chicago fans something to believe in. Cutler is a good quarterback. Who has a offensive line now bringing stability on the team’s offense.