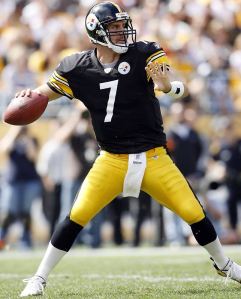 For many years Pittsburgh has been the staple of a region where hard work and well earned sweat have been the trademark. Ben Roethlisberger has been everything you would want from a QB for a franchise standpoint, he has heart, had many game winning drives has won Super Bowls, won 10 playoff games, as well has the most passing yards in Steelers history.

Ben has been what the Steelers needed after so many years with lame duck QBs like Tommy Maddox and Kordell Stewart in the wake of them for several previous Ben years.

But now he is leading a miserable Steelers team that is scarcely surviving in the ICU after a dreadful start to the season. They are off to their worst start in 35+ years. This is a situation that Ben Roethlisberger has never found himself in before, with 85+ victories under his belt, he has had a career 66% win pct as a starting QB, he wins games, not always pretty but has proven to be a winner.

Last year he was exceptional, even with a lower ended offense that was 22nd in the league, scoring only 21 a game. This year things are looking a bit different for the worse. The Steelers are putting up just 17 a clip. They have struggled passing the ball, and also rushing the ball. They haven’t found what this team’s character is.

Now granted, they have lost a few players including speedster WR Mike Wallace to Miami, where he is having a decent season with young up and comer QB Tannehill finding him on the field. But the Steelers are trapped with their top guys of Antonio Brown and Emmanuel Sanders, who simply aren’t getting the ball in the endzone nearly as much as Steeler fans were expecting and hoping for.

What has Ben done to fix things? This season he has been inconsistent, particularly in the opponents red zone. On the year he has been hitting only 52% of his passes inside opponent’s 20 yard line, where you need your QB to be on his best, with a short field.

Previously for many seasons, Big Ben would make defense panic when they saw him scrambling around in the pocket after blitzing him, he would stagger, stumble, duck, pull away with his massive 6-5 frame and fire a ball downfield for the 1st down that broke an opponent’s will. It doesn’t have that same vibe in Pittsburgh anymore.

Steeler’s fans have always shown a great deal of devotion to Roethlisberger, but it’s time to take note to the bad plays, the fumbles, interceptions, and the bad time management. It’s very hard to believe the Steelers can bounce back from this horrendous start to the 2013 campaign.

The Steelers are not quite known for picking up guys in free agency, or hitting waiver wires for support, and they haven’t done too well in recent drafts either for offensive weaponry to lend a hand. What’s going on in Pennsylvania, where will the Steelers be over the next 3-4 years? What is this team going to look like?